What Mr. DiDonna is reading today

October 09, 2018
Maledetto Cristoforo Colombo e quando ha scoperto l’America.
(Damn Christopher Columbus and his discovery of America.)
—A popular curse among Italian immigrants
The attention on Confederate-focused statuary in public spaces has led to reflection on other historical figures carved in marble or cast in bronze. Perhaps no other individual has single-handedly spurred such impassioned ethnic controversy as the fifteenth-century Genovese navigator, Christopher Columbus.
For nearly two centuries, many Americans have lauded Columbus as the heroic discoverer of a new world. Even so, in his time, Columbus was critiqued and investigated for his cruelty to Native peoples as the Spanish-appointed governor of the newly claimed territories in the Caribbean. In his desire for profit—the Spanish court had awarded him 10 percent of future spoils—Columbus tortured and enslaved Arawaks and Taínos, and he established the repartimiento system of forced labor in the desperate search for the islands’ negligible gold. These and other atrocities established a genocidal approach to colonization of the Americas; they remain a crucial aspect of Columbus’s legacy.

Sympathy Labor Parade for Carlo Tresca, December 2, 1916, Library of Congress Prints and Photographs Division Washington, D.C.
The lack of commemorative public art dedicated to Italian American activists—such as Angela Bambace, Pete Panto, and Carlo Tresca, who struggled on behalf of workers’ rights, and James Groppi and Vito Russo, who fought on behalf of civil rights—or victims of anti-Italian violence, such as the eleven men lynched in New Orleans in 1891, let alone the executed anarchists Sacco and Vanzetti, is not surprising. Early-twentieth-century ethnic leaders ingratiated themselves with the Anglo-Saxon ruling class, profited from the working poor, spoke out against unions, and aligned themselves at times with Fascists. Over the years, the labor and civil rights of working-class Italian Americans were ferociously suppressed. Barring only a few examples, such as the 1918 Colorado Ludlow Monument and the planned memorial to the 1911 Triangle Shirtwaist Factory Fire in New York City, Italian Americans have rarely worked for the commemoration of their working-class immigrant history and have ignored, forgotten, or otherwise erased aspects of their collective experiences.
All symbolic works, especially those that bear the weight of group identities, are open to re-interpretation by members of a pluralistic society. Understanding the historical context in which commemorative objects are erected reminds us of the dangers of investing too much symbolic power in any one individual. We instead imagine alternatives and look toward a new generation of Italian Americans who find different ways to bear witness to their histories and evolving lives.

Laura E. Ruberto is a professor in the Department of Arts and Cultural Studies at Berkeley City College and the author of Gramsci Migration and the Representation of Women’s Work in Italy and the U.S. (2007). Joseph Sciorra is a director at Queens College’s John D. Calandra Italian American Institute and the author of Built with Faith: Italian American Imagination and Catholic Material Culture in New York City (2015). Ruberto and Sciorra are the co-editors of the two-volume New Italian Migrations to the United States, Vol. 1: Politics and History since 1945 (2017) and Vol 2: Art and Culture since 1945 (2017).

Popular posts from this blog 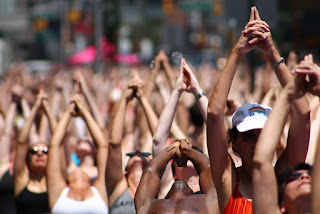 Hey all! Yesterday I participated in a great workshop called "The Issues In Our Tissues: Yoga, Trauma and Social Justice." You may be wondering: what the heck does yoga have to do with trauma and social justice? Well...plenty. It's well documented that communities and subgroups of folks who suffer the injustices of the world are more likely to suffer trauma. Trauma is what happens when our ability to cope is overwhelmed, leaving us feeling helpless, hopeless and out of control. In situations of trauma and stress, our sympathetic nervous system activates and we go into fight / flight / freeze mode. Being in an activated state for a prolonged period of time takes its toll on our bodies and minds. Whether we as individuals belong to an oppressed group, or whether we are taking part in social justice work, or even if we are just existing in today's political and social landscape, our nervous systems are, no doubt, activated. When we're in this state of hig
Read more

A Journey into the Matter of Blindness

October 03, 2018
A Deeper Darkness from Mr. DiDonna This past summer I had the privilege of attending a permanent exhibit at the Israeli Children’s Museum in Holon, Israel. I was delivered to the venue by an Israeli host without forewarning of what was about to ensue. I could tell something was up by the look of mischief on her face, and this made me a bit suspicious. I mean, it was a “museum,” not a house of horrors. Upon checking in, I was led over to a small waiting area and handed a walking stick usually reserved for people who are blind. I was surrounded by a gathering of about a dozen fellow participants (with identical walking sticks) whom I had never met, and with whom I believed I had nothing in common. As I continued to focus on the sign overhead which read “Dialogue in the Dark,” I searched for clues as to what I was about to experience. My hosts remained silent. Soon, a concierge introduced herself and explained that we would be escorted through the “installation” for the next hour
Read more